Land Of The Creeps Episode 058 : Bubba Didn't Do It

Download
Welcome to episode 58 of L.O.T.C. During this episode the crew starts with some plugs from Justin Beahm for the upcoming Mane Entertainment project Penance Lane. This project is coming close to the finish line on the indiegogo page so please head over to the pledge site and donate now. Link will be below. Also Justin talks about the theatrical release of Silent Night Deadly Night restored to HD quality in December. Below is the link to check if it is playing near you. Justin finishes with talking a little about a couple projects he was involved with from Scream Factory which are the releases of John Carpenters Body Bags and also Tank Girl. You will not want to miss this conversation.
Next we also have Michael Neel Director of The Drive-In Horror Show and also the new feature Infinite Santa 8000. Michael has been a dear friend of ours since our beginnings and we wish him all the success possible and would ask that everyone check out Infinite Santa 8000. Links are below.
Next we have an interview with Director B.J. McDonnell who has recently been asked to direct the Penance Lane film. We had a blast with this interview.. B.J.'s links are below as well.
Lastly GregaMortis talks about a film coming out in 2014 from the Mastermind Kenny Caperton from the Myers House, NC. in which GregaMortis has a small part in the film along with one of out listeners Gary Timmons. Links below. We want to thanks each one of these guys for being on this episode! 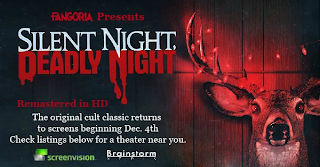 Halloween has passed and the Christmas Holidays are soon upon us. What better way to get us in the Holiday mood than to watch 1984's Cult Classic Silent Night Deadly Night on the big screen!! Thanks to Fangoria and Justin Beahm this dream is becoming a reality starting December 4th in select theaters!!! Silent Night Deadly Night has been Remastered in beautiful HD and will be seen for the 1st time the way it was meant to be on a huge screen with surround. Below is a link to which theaters will be showing this film so bookmark the site and check back daily as theaters will be slowly coming on board. I personally want to thank Fangoria and Justin Beahm for all there hard work and dedication to US the Horror fans...

Fangoriascreen Website Link
Posted by gregamortis at 2:06 AM No comments:
Email ThisBlogThis!Share to TwitterShare to FacebookShare to Pinterest

Land Of The Creeps Episode 057 : Conjuring And Maniac

Welcome to episode 57 od LOTC!!!! During this episode the crew goes new school with 2 brand new released films in a way that only LOTC can. The movies during this episode are 2013 mega hit The Conjuring and then we finish up with 2013 Maniac. What did we think about these films? You must listen to find out!!! Also we talk about Penance Lane once again. There is still time to help support this great project... head over to the Penance Lane Indiegogo page and donate now, I promise it will be an awesome film and there are numerous levels with perks you can donate!!!! Below are the links.