Land Of the Creeps Episode 060 : Christmas Horror And Justin Beahm


Download
Welcome to our Christmas Episode of L.O.T.C. We at LOTC would like to wish each and everyone of YOU the listeners a Merry Christmas!!!! This episode is a very special 2 movie commentary of Silent Night Deadly Night Part 1 & 2. GregaMortis, Haddonfield Hatchet and Justin Beahm makes up the commentary team on this episode and you will not want to miss this episode as we laugh and scream and shout all through this movie lol. As a bonus GregaMortis also brings an interview with the creator of a movie website called The Bloodbath Theory, Rob DiLauro!! GregaMortis has joined the Bloodbath Theory team as a contributor. So please follow the link below and bookmark the site for daily news on all things geek. So get your movies ready and pop your popcorn get your beverage of choice and enjoy Silent Night Deadly Night with us here at LOTC!!!

Land Of The Creeps Episode 061 : April Snow Over An Open Grave

Download
Welcome to episode 61 of LOTC!!!! It is Christmas, a time of giving and this is what we are doing on this episode. We are giving you the listeners not only 2 movie reviews, 1977 made for T.V. Snowbeast and 2009 Dead Snow, but also 2 great interviews. The first interview is from Director of a great film releasing on VOD December 24th Open Grave. Gonzalo Lopez-Gallego did a superb job with Open Grave and we feel honored to have had him come on LOTC for 15 minutes. GregaMortis highly recommends a watch and once Open Grave becomes available on DVD and Blu-Ray a Purchase. But if this was not enough GregaMortis goes to church with the talented actress April Washko. This interview was not just fun but very informative and inspiring. We are also joined by Co-Host of Terror Troop Podcast Nasty Will. Will is so awesome and we enjoyed the Hell out of him being on this episode. So please sit back turn the volume up and enjoy this episode as much as we enjoyed recording. Please check out the links for April Washko and leave us your comments. 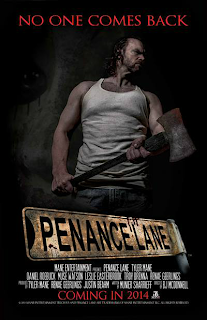 What an exciting time we are in store for. Mane Entertainment has released the Movie Poster for their upcoming film Penance Lane!!  This poster look so awesome and each day that passes I get more excited for the day when Penance Lane is released. If you have not donated to the Penance Lane Indiegogo page please do so now. Click Here for the indiegogo page. Also if you are on Facebook be sure to head over to the Facebook page for all the details. Mane Entertainment FaceBook

Posted by gregamortis at 8:49 PM No comments:
Email ThisBlogThis!Share to TwitterShare to FacebookShare to Pinterest 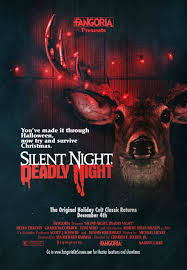 It is almost Christmas time and what better way to celebrate than with a great Christmas Horror flick like the classic 1984 Silent Night Deadly Night!!! Thanks to Fangoria, Justin Beahm and Screenvision Horror fans have the opportunity to see one of my all time favorite slasher films in select theaters. Silent Night Deadly Night began a limited release in theaters all across the US on December 4th and I was fortunate to have been able to see it on the big screen last night. Fangoria is boasting a HD transfer of the film, now I am not going to be to critical here but I need to mention that the picture quality for me was about the same as a DVD picture. You say did that hurt or distract you while watching the film? NO!!!!! I honestly have to say as I sat in the theater I was taking back to an almost grindhouse, Drive-In experience which I thought was great. I know there are going to be viewers who will say the picture was not great, there was no 5 point surround etc... but I want the viewers to keep in mind this is a film that was released in 1984 and has had very little DVD exposure. So before you criticize keep this in mind and just enjoy this film as much as I did for the fact that it is on a big Screen!!!
Would I recommend viewers to spend there hard earned money to go and watch Silent Night Deadly Night? I answer this with a 100% YES!!!! So don't miss out on the opportunity to support these films being re-released as it takes US going to possibly have more films released in the future!!!
Here is the link for Screenvision on the list of Theaters showing Silent Night Deadly Night..
Fangoriaonscreen
By: GregaMortis
Posted by gregamortis at 2:46 PM No comments:
Email ThisBlogThis!Share to TwitterShare to FacebookShare to Pinterest

Land Of The Creeps Episode 059 : The Town That Dreaded Sundown

Download
Welcome to a special commentary episode on LOTC!!!! This episode GregaMortis is joined by Dr. Shock and also Justin Beahm. This is by far my favorite commentary to date as the information and details just blew me away. I hope each and everyone of you will put your Town That Dreaded Sundown movie in your player and listen to us discuss this film from start to finish. I want to thank Justin Beahm for being on this episode.